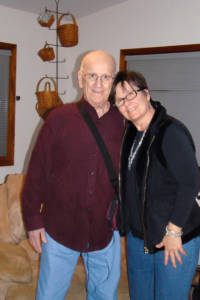 When Carol Olnick discovered her father’s health was declining, she decided to turn her life in a new direction. Recently retired from a demanding executive role with the federal government, Carol left her city life and moved to Central Pennsylvania to be closer to her parents.

Carol’s father, Carl, had been battling heart disease, Parkinson’s and complications from a stroke for nearly 20 years.

“Doctors would say there was nothing they could do for him,” Carol said. “Then, the next thing we knew, there would be a new experimental treatment available. He was really defying all the odds, and in some ways, we thought he’d never let go.”

Slowly, Carl was starting to let go. He wasn’t enjoying the things he once loved to do and began becoming restless with anxiety and pain, causing him to withhold some of the medications that were keeping him alive.

Unlike many other families, the Olnicks welcomed the word “hospice” with open arms.

“Although it was hard, I was ready to see some of the burden taken off my mom,” Carol said. “I could tell dad was done with being poked and prodded. He just wanted to be comfortable.”

Carol’s mother was cooking all her husband’s favorite meals, assisting him with his personal care and driving him to all his appointments. These were all large tasks to ask of a then 78-year-old woman.

Once hospice worked with Carol and her mother to formulate a care plan for Carl to keep him stabilized and pain free, Carol realized there was still valuable time left with her father. “He was alert and coherent, which was important to us, and hospice knew that,” she said. “He told me stories about his childhood and his time in the Air Force. It’s a gift when you can spend time with someone, the time you miss out on when you’re too busy with your own life and career.”

Carol’s father’s biggest end of life wishes were to stay in his home and not to let pain medication dull him. He remained on hospice for nearly two years, which was unexpected and remarkable. Fortunately, with the help of hospice, Carol’s father met all of his most important milestones, which included his 60th wedding anniversary, his 80th birthday and watching his favorite baseball teams win championship games.

“The staff became our family,” Carol recalls. “At first, dad was hesitant to have people other than mom care for him, but eventually, mom and I would look at each other and smile when we heard dad laughing with the staff.”

The Olnicks’ hospice nurse, Bob Heim, became like a son to Carl, and they shared nicknames and inside jokes. Carol and her mother both realized that although Carl’s specialty doctors were great, they could have never given him the day-to-day support like hospice staff could. “Whenever dad didn’t want to do something, we’d tell him, ‘Bob said to do this,’ and he would smile and do it,” Carol recalls.

“There was such a connection with everyone,” she said. “Mom and I still say we wouldn’t have known what to do without them.”

Toward the end of Carl’s life, with each passing day, hospice encouraged Carol and her mother by telling them they were doing everything right. “They saw that Dad’s slow death was taking a toll on us,” Carol recalls. “Dad was getting frustrated waiting for the end to come and nothing was coming.”

During this time, Carol was sleeping on her parent’s couch each night, worried not only about her father’s health, but her mother’s emotional health, as well.

“Bob told us how hard it is to see your loved one getting sicker, and that he had the privilege of being the medical professional,” Carol recalls. “He said this, but I saw him leave dad’s bedside saddened several times. I thought to myself, ‘Now, that is a compassionate professional.’”

Looking back, Carol realizes how close her dad had grown to staff over the years, something that could only come with talking about care plans, changing out medications and facing the fears of the unknown together.

After her father’s passing in March 2016, Carol knew she wasn’t ready to say goodbye to the hospice team.

“I told them I would be volunteering when I was ready,” Carol said.

“I didn’t want to lose their friendship.”

Although she witnessed her father’s hospice journey first hand, she didn’t quite know what to expect as a volunteer. A year and a half later, her experience turned out to be a leap of faith that was well worth it. “I was afraid I would feel sad all the time, but I don’t,” she says. “I get more out of it than what I give. It’s too bad some people don’t know about hospice soon enough, because I see it gives people peace, like it did for us.”

Today, Carol is part of the team that changes lives like hers.

“Sometimes all the patients need is company and conversation,” she says. “They tell me their happiest memories, and they also tell me their regrets.”

If a patient isn’t coherent or able to speak, Carol plays them their favorite music, reads to them or even resorts to telling funny stories about her two beloved dogs.

“I believe every patient can hear me, and I don’t want them to be afraid or alone,” Carol said. “When I see their family at their bedside, I feel privileged to witness such love and devotion.”

When family is unable to be at the bedside of their loved one, Masonic Village Hospice staff and volunteers fill the void. “I was visiting one patient, and I could tell his passing was coming,” Carol recalls. “I just held his hand and told him it was okay for him to go. His death was beautiful, and there were signs of relief for him. I just told him how grateful I was to have met him.”

Volunteering has provided Carol with an outlet to overcome her grief as well as reflect on her own family’s last few years.

“When my dad died, I didn’t have the same experience I did with that patient,” Carol recalls. “I was trying to call everyone, and I missed the moment. I just wish I had held his hands and provided a calmer send-off like I try to do for patients now.”

Carol is taking a memoir writing course at a local library, which is also helping her heal. She hopes to write patients’ stories in the future, so their families may have a special keepsake. In addition to giving of her time, Carol also financially supports Masonic Village Hospice because she believes so deeply in its mission.

“I just want hospice to be able to keep giving the same kind of care my dad received to others,” Carol said. “I give in honor of my dad, because I know he would feel the same way.”

Masonic Villages have been monitoring the Coronavirus (COVID-19) situation and preparing for potential impact on any of our communities. Families of residents in our nursing and personal care areas may call the following number for updates: 1-201-340-3937.Read the latest up-to-date information on our campuses.
+ +