Home/Care, Health/“They Will Love Your Family Member Like You Do” 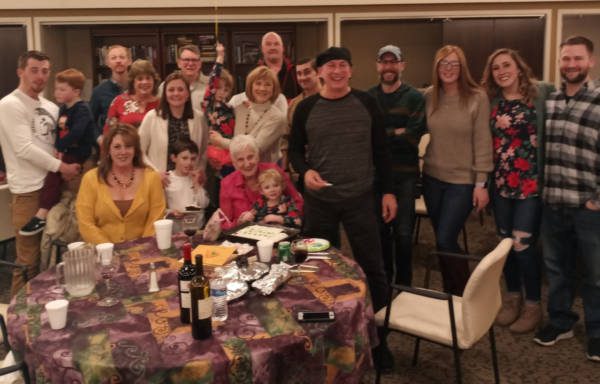 Andy Harrin will never forget the words spoken by a staff member during one of his many visits to see his mother at Masonic Village at Warminster.

“Your mother is a gift to us.”

“When that was said to me … that’s a powerful thing to say to someone,” he said. “What I’ve witnessed over the past three years is just that. They will love your family member like you do.”

Andy’s mother, resident Eli (Elinor) Harrin, celebrated her third anniversary at Masonic Village in early March. Andy had explored other continuing care facilities, but when he visited Masonic Village, he knew it was the right place for his mother.

“In the first five minutes, I said ‘These people do things very differently than anywhere else I’ve been,’” he said. “I didn’t see people with passion [at the other places]. I saw people doing their jobs. There’s a big difference. When I strolled the facility [at Masonic], I was blown away by how they cared for people, from the ladies at the front desk to the nurses. Over the last couple years, I saw people love my mother.”

Elinor Harrin was diagnosed with Alzheimer’s disease nine years ago. Although her memory is limited, she is “always happy,” Andy said. At Masonic Village, she enjoys playing bingo and other games, watching movies and socializing with residents in small groups. Andy and his two sisters, Patti and Terri, live nearby. At the height of the pandemic, they had outdoor visits with their mother every Sunday through the window in the multi-purpose room. Last Sunday was the first time in months they were all able to sit at an actual table with their mother.

“She was great,” Andy said. “She wanted to hug and high-five us. We had to explain why we couldn’t do that yet [because of COVID].”

Elinor grew up in Ashland, Pennsylvania. She had nine siblings, including two who passed away, one being a fraternal twin. She attended St. Joseph’s Catholic School in Ashland. After completing her education, she started her career at Bell Telephone as a board operator. She also waitressed for many years while raising her family. Later in her life, she worked for First Pennsylvania Bank, which was acquired by Philadelphia National Bank and later became Wells Fargo Bank. There, she worked her way up to become supervisor of the tellers.

Before moving to Masonic Village, Elinor lived with her late husband, Tom, in the same house in Hatboro, Pennsylvania, for 50 years.

“It’s the only home she had in her adult life,” Andy said. “She stopped eating, did not have the best hygiene and became confused. I thought, ‘She’s going to fall down the steps one night.’ I could see things were changing, and I was no longer comfortable. That’s the reason I started looking at facilities. Masonic Village was the right fit.”